Military service isn’t considered women’s business in most places in the world. But there are countries where women soldiers are valuable specialists and, of course, pleasing to the eye. Here is the top of them.

By the end of the twentieth century women and warfare didn’t go together, but today the US Army comprises more than 15% of women soldiers.

In July 2013, the US Government lifted the pre-existing ban on women’s participation in warfare at the front. From that moment on, women enlisted in the army could join the Navy, artillery, infantry or even Special Forces.

But this only legitimized a then-existing true situation. The thing was that women serving at checkpoints or in units engaged in information-gathering or as military transport drivers in Afghanistan and Iraq where there was no clear front line had often found themselves in the thick of things with arms in their hands.

American women’s willingness to serve in the armed forces is easily explained. The US Army equips them with trades, pays for their education at any university and provides them with jobs.

To date, the US armed forces include two women generals and one female admiral. 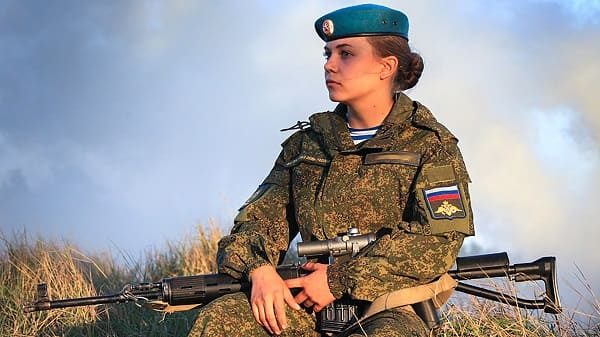 If a woman wears shoulder boards, her commander has every right to send her to trenches on the front lines.

At the same time, there is an unspoken rule, according to which women who are sent to the battlefield aren’t participate in them – they serve in medical stations, communication centers in order to protect them from danger.

Although Russian military girls wear the same female military uniforms as all other military personnel, they don’t forget to put on makeup and beautiful earrings even when they go to a firing range. Such deviations from rules embedded in the Charter are treated leniently by their commanders.

In October 2014, the Norwegian parliament approved a law, according to which military service would be mandatory not only for men, but for women as well. 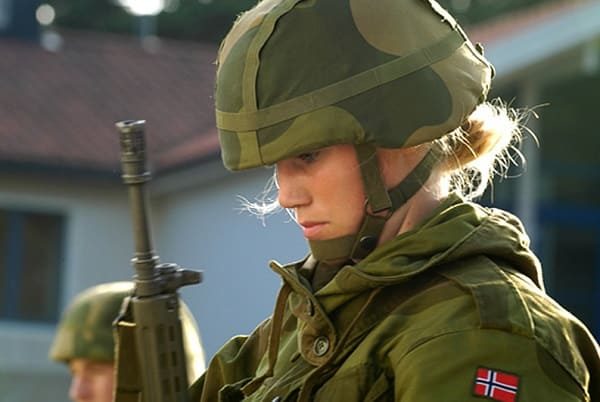 Norway was the first member of NATO that went for such innovation during peacetime. This was done with a view to respect the principle of gender equality.

In the view of Norwegian politicians, the rights and obligations should be equal for all. And the army should have access to the best resources regardless of their gender.

Norwegian women soldiers serve in all branches of armed forces without exception. They can be found even at warships and minesweepers.

It’s interesting that the age of recruitment is in the range of 19 to 44.

Bundeswehr (The German Army) opened its doors to women after changes in the Constitution made in 2001. 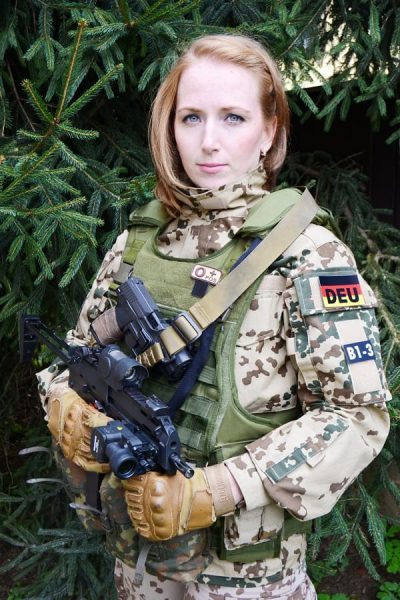 As it is known, this country had resisted the involvement of women in military actions after WW2. However, constitutional changes led to a great number of women joining the armed forces immediately.

By EC court order, all military trades were made accessible to women in 2001.

Nevertheless, the euphoria of full equality faded rapidly, because ten years later the German Ministry of Defense confessed that only half of those girls who had exercised their right to join the army said that they chose a right occupation.

But there are a lot of beautiful German women soldiers who have served there until now.

Women have served in the Peoples Liberation Army of China from the very beginning of its foundation. As a rule, they are dressed in women military uniform, but these army women hold jobs with minimal risk in structures like communication and healthcare. 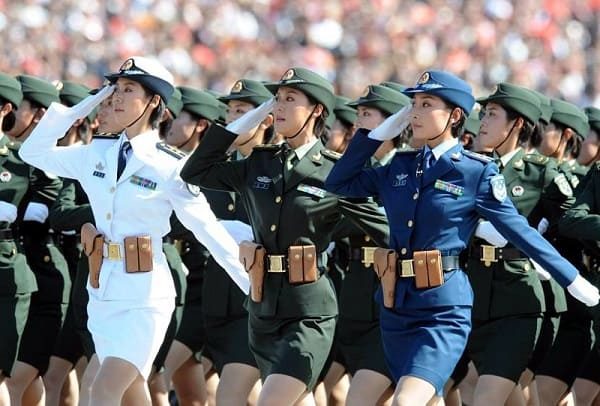 However, the number of female military personnel enlisted in combat units has increased lately. They can be found even in an aircraft carrier crew. And to tell the truth, their cabins are more comfortable than men’s ones. It means that women in the Chinese army get a special treatment.

There are also women marines, fighter pilots and even a woman who rules a hospital ship weighing 14 thousand tons.

By the way, China is among countries with the largest number of female pilots in the world.

Israel (has the biggest number of women soldiers in percentage terms)

Girls wearing female army uniform and holding automatic rifles in their hands is a familiar sight in Israel. They perform their military duty on an equal basis with men. 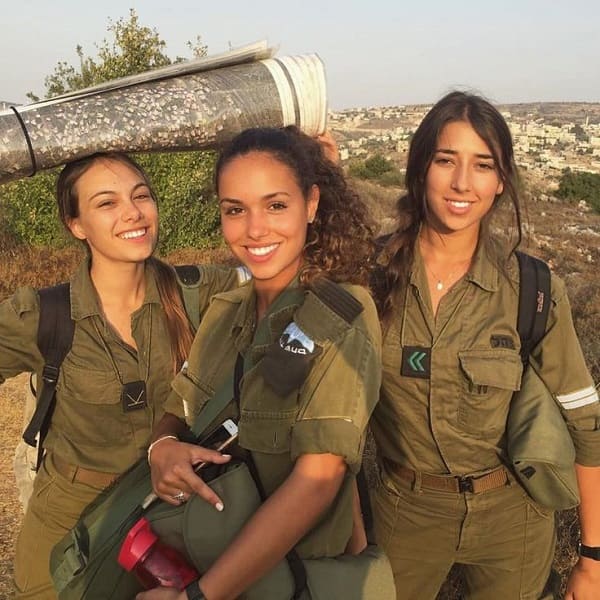 The participation of women in Israel Defense has its long historical background that dates back to the time when a biblical character Deborah defended her country from foreign invaders with arms.

This tradition re-emerged in modern Israel. According to the Act on Military Service adopted in 1958, medically-fit, unmarried women over the age of 18 without children are subject to enlistment. The law also provides for the public service of religious women and girls whose moral values don’t let them serve in the army.

As a rule, they serve for 1 year 9 month, but in recent years the period of service of women whose specialization requires advanced training has been extended to 36 months, which is the same term of service as men’s one.

Until 1999, Polish women were recruited for military service on an exceptional basis and under special conditions. They weren’t involved in being on duty and were exempted from physical fitness tests.

Since 1999, they have been given an opportunity to serve on an equal basis with men.

One of the main reasons why Polish women strive to serve in the army is an economic factor, namely better salaries as compared to a civilian sector.

The vast majority of women soldiers serve as interpreters, lawyers, psychologists and lecturers.

The last male-dominated institution in South Korea can no longer withstand the pressure of young Korean women wishing to serve in the army. Until recently, they had been allowed to serve in women’s support service. 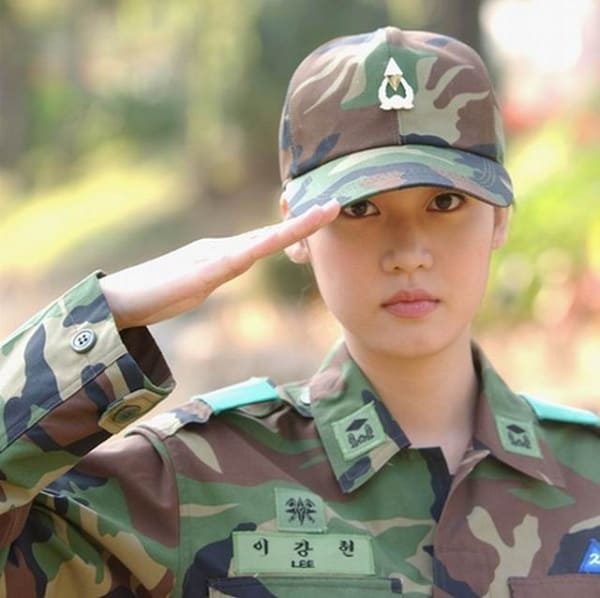 But a bad dream of conservative Korean generals will come to life soon, because there will be a lot of girls in the Korean regular army. And resistance is futile, mainly because of a demographic crisis and consequently reduction in the number of male recruits.

Moreover, they want to definitely overcome such a relic of the Confucian past as gender discrimination.

And the icing on the cake was that in 2013 a woman became President of South Korea and the first woman Commander-in-Chief.

Women warriors have been demonstrating exemplary military service in the armed forces of the UK for more than 100 years already. And they fulfil very important functions. 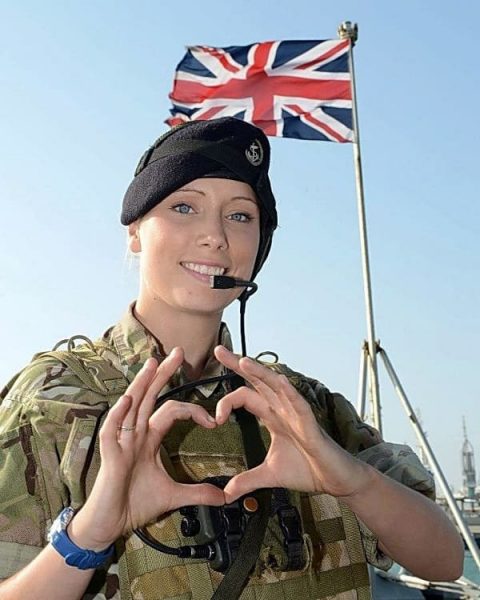 According to mass media, the British Army comprises about 7 thousand women soldiers.

One of the main physical fitness requirements for them is a 13-kilometer march, carrying equipment weighing 25 kilograms.

It’s interesting that in 2016 the United Kingdom’s Armed Forces allowed to recruit women for military units involved in carrying out combat roles.

Which women soldiers do you mostly like? Would you go dating with such a girl? Write in comments, please!