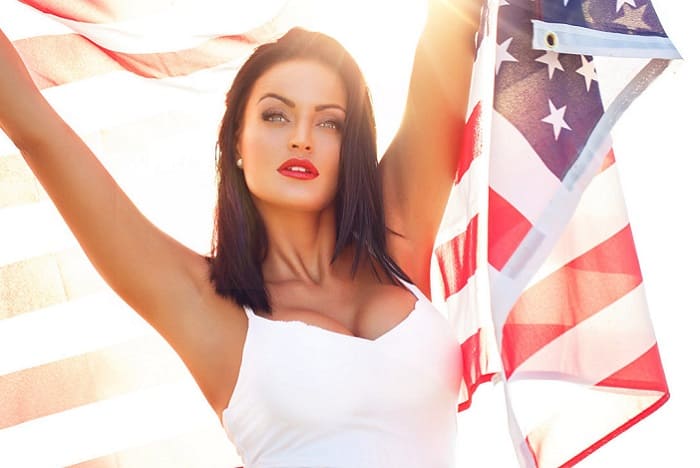 In spite of myths, American women look very good. And almost every young American woman is beautiful, in my opinion. However, their view of beauty is a bit different from ours: cleanliness (you can call it grooming), sporting body shape while having big breasts, vitality and energy.

They usually have well-groomed hair (hairdressers here are packed with girls and women who, in my opinion, yet don’t have to do anything with their hair – they just come to comb it), arms, legs, as well as fitness sessions twice a week.

And, of course, teeth. A person who does not take care of his or her teeth is simply an outcast of society in the United States 🙂

Every girl has a little black dress – for solemn and official occasions… I remember, once at the university, I run into the flocks of beautiful girls who were coming nearby. Not a single black dress was repeated, I wanted to sketch the styles right on the spot …

The girls all were walking barefoot, having exquisite heeled shoes in their hands. The dresses and the shoes were very expensive, but American women consider it completely unnecessary to style where it is not required.

American women like to change clothes every day, and it seems that they consider it as a must-have. I do not mean them changing dirty for clean ones, but one for the other. Teenage girls schedule their clothes for six months in advance. And then they can repeat it. Adult American women do not do it, but I very rarely see my friends wearing something they’ve already had earlier.

At the same time, American women feel better to brands. If they have enough money, they buy things of those brands they can afford. If not, they settle for Walmart and Target.

But there are two exceptions:

The fact is that American women do not seek to please a man. There is little or no coquetry in them – neither intentional nor natural. First and foremost, they want to please themselves 🙂

They are very good, but they do not spread vibes around them.

Feminism has shaped American women. Leaving aside all sorts of ridiculous things, like a serious discussion of sexism in language, I must admit that feminism has played a rather positive role in shaping the modern family. Although, men, of course, had to sacrifice a lot. But the ones I know seem quite satisfied with their lives.

The American family is an alliance of fellow survivors that allows each of them to become more resilient. Roughly speaking, stand firmly on two legs, not one. A spouse is a partner in life and business and an insurance – in case of life troubles.

The United States is not a social country at all. Tears are not believed here, and, in fact, no one cries. You can lose your job very fast – your computer is locked, you will never get access to it again, they shake your hand saying for the loss of such an outstanding employee – and goodbye. The fact that you’ve bought a house a month before is of no interest to anyone.

A working wife creates more space to maneuver in life. Although the majority of American women choose women’s areas of work. A very feminine and prestigious job is, let’s just say, a teacher. Numerous secretaries, office and government workers, librarians, nurses are women, too. In addition, the choice of not highly-paid and non-competitive job often means greater social security in the United States – health insurance, for example. It is usually much more difficult to fire a person from such jobs.

There are less American women who choose a career. In many jobs, they have an advantage in hiring. However, women working in areas competitive with men do not have any advantages at work – neither as women, nor as wives or mothers. There is almost no maternity leave in the United States. There are no child benefits. There are no concessions related to children’s illnesses, either.

I knew women in the States who bore a baby on the first day they did not go to work. At the same time, they went to work from the suburbs to Manhattan, spending about an hour and a half one way by train and other.

I also knew those who, with the same mode of work, managed to keep breastfeeding for a year. I remember a wonderful advertisement for a breast pump: a lady wearing a strict office suit, unbuttoned at the chest, working in both hands on laptop and phone. On the table, along with the office supplies, there are two breast pumps, and they’re also working – in automatic mode. Very vital :).

There are, of course, women who choose a family. But these are few now. And they usually have much more children than the average American family.

On average, white American women have 3 children. They have four children, or more than two. One is very rare. I knew women who gave birth to three children while being between 40 and 45 y.o. The babies were healthy and smart.

But children in a non-social state are entirely of your concern, your happiness and your care. Therefore, American women choose an amount of children to be joyful to raise, and not a burden.

In this situation, some household duties are left for man. Boys in America are always given more responsibility at home (it often doesn’t concern to girls). Women in the United States are often good housewives – many have a house in almost perfect condition. But often they do not like to cook. In such cases, the men cook. 🙂

Adultery is not approved in the United States. Of course, there is, including celebrities having scandals. And there are call girls as well. But it is usually condemned by public opinion. And it is not to be proud of in a narrow male company. Cheating on your wife is cheating on your first and the main partner in your life. And dishonesty is one of the most serious human sins, as Americans think. Who would trust a person who cheats on his life partner?

In the United States, it is customary to study partners before marriage. However, many people do not do it. I was shocked when one of my son’s nannies, a 26-year-old girl, asked for my opinion about premarital sex she could not decide to with her boyfriend. Marriage is a serious thing, a kind of business and financial project, and it is not accepted to get it hastily.

The Americans consider 42 years old to be the age of the top of the hill, the limit of youth :). A person goes up all the time before it. Then he’s standing a little at the top and going down.

I often make mistakes in determining the age of American women. 35-year-old women often look like 25, but at 42 they look 35. I think that 300 bucks invested in look and body shape are not crucial – the absence of stress is more important. Or just the desire to minimize it in everyday life.

Americans try not to sort things out – it is intolerable for them, not to mention raising voices and angry intonations. To clarify the relationship, there is an army of mediators between the conflicting parties in various circumstances. American women and men always smile everywhere, they are friendly and benevolent, since it allows them to be in a good mood and health above all.

Moreover, there is enough stress everywhere, including in personal life. A partnership marriage is a marriage of two independent individuals, The American woman always remembers that she has her private life that partly includes her husband, children, family. And she never dissolves in it, even in children.

The American woman has a separate bank account her husband has no information about, and her private credit cards. Doctors categorically refuse to tell anything to a husband without a written request from the wife about it. Even about her blood sugar test. 🙂 Americans always try to rely primarily on themselves.

Therefore, in general, American women, of course, are much tougher than Russian women. Even those that seem to be the angels of femininity. Whoever they work for, they have a grip of steel. Try to rub the American woman the wrong way, and she would fight you back with a smile:)