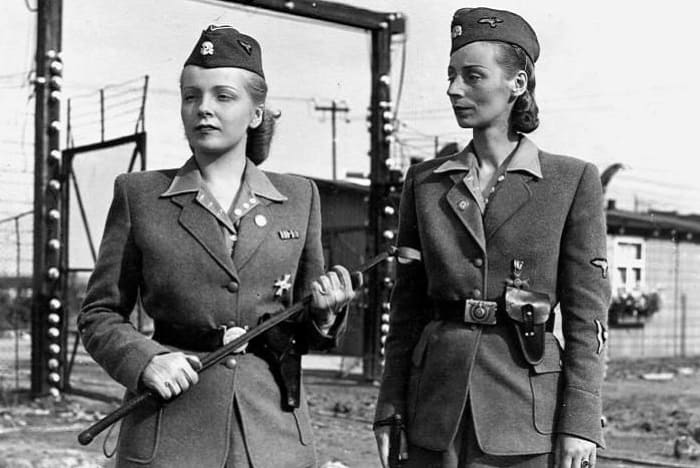 The severe crimes of fascists still terrify people all over the world. And among those who gave inhuman orders were women, no matter how scary it is. Let’s look at the top-10 cruel women of the Third Reich.

This representative of German women was the warden of Nazi death camps called Ravensbruck, Auschwitz as well as Bergen-Belsen. She had such nicknames as “Blonde Devil”, “The angel of death” and “Beautiful monster”.

She used emotional and physical methods to torture against prisoners. She beat women to death and enjoyed the random shooting of detainees. Irma starved her dogs in order to set them against victims afterwards. She personally selected hundreds of people for sending them to gas chambers. In the post-war press, they discussed her probable sexual deviancy with SS guards.

In April 1945 Irma was captured by the English. She was found guilty and sentenced to be hanged by the British military tribunal. On the last night before the execution she sang songs with one of blonde women who were her colleague named Elizabeth Volkenrath. When a noose was put around her neck she remained calm. Her last word to an English executioner was, “Hurry up!”

This member of NSDAP was Karl Koch’s wife – he was the commandant of Buchenwald and Majdanek concentration camps during WW2. She got the nickname “Buchenwald Witch” for the severe torture of the camp’s prisoners. Ilse was also accused of making souvenirs out of human skin. 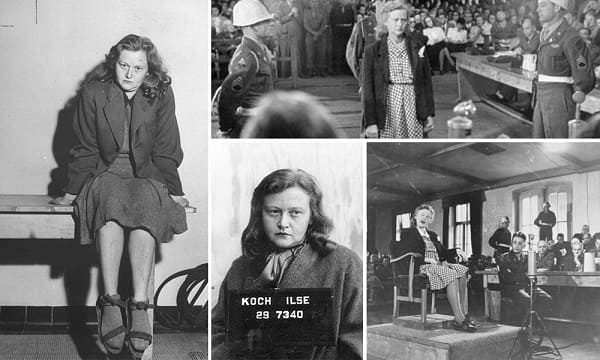 In June 1945 she was arrested by the American troops and sentenced to life imprisonment. Then she was released by an American commandant, who believed that the charges against Ilse had been insufficiently substantiated.

It gave rise to protests from the public, therefore in 1951 Koch was arrested again and sentenced to life imprisonment by the German Court. In 1967 Ilse committed suicide by hanging herself in a Bavarian prison cell.

She was one of those German women who became the overseers of women’s concentration camps of the Third Reich. Luise started to work in Ravensbruck camp, then she was transferred to Majdanek. She also served in Malchow and Auschwitz. 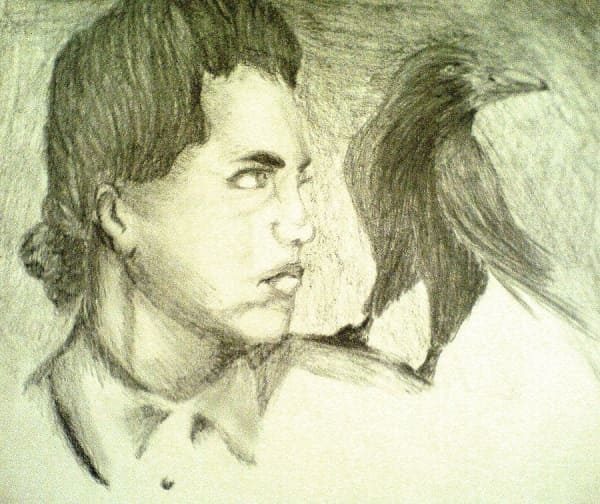 Danz beat detainees and confiscated their winter clothes. In Malchow, where she held the position of a senior overseer, Luise starved prisoners, giving them food once every three days. In April 1945 she killed a girl.

She was arrested in June 1945 and sentenced to life imprisonment. But in 1956 Danz was released for health reasons. When in 1996 she was again charged with murdering the child, doctors said that it would be very hard for one of ageing women to bear another imprisonment and the charges against her were dropped. They say she is still alive and lives in Germany.

Between 1940 and 1943 she, unlike many of Nazi women, Jenny-Walda worked as a fashion model and didn’t relate to warrior women. Then, Jenny started working for the Third Reich and became the warden of Stutthof camp. She was famous for the severe beating of female prisoners, some of them she beat to death.

She also participated in the compilation of a list of children and women who were supposed to be sent to gas chambers. Barkmann was cruel and wonderful, that’s why prisoners called her “Beautiful ghost”.

She was arrested in May 1945 and found guilty, after which Jenny was given the last word. She said: “Life is really great pleasure, but, as a rule, the pleasure doesn’t last long”.

Barkmann was hanged in public not far from Gdańsk in 1946. Her body was burnt and her dust was washed away in the restroom of a house where she had been born.

In 1942, she started to serve the Third Reich as the overseer of Ravensbruck camp. Then, Herta was transferred to Stutthof camp near the city of Gdansk. In it, she got the nickname “Stutthof sadist” because of cruel treatment of women-detainees.

Since January 1945 she was the warden of death march which began from central Poland and finished at Bergen-Belsen camp. After the liberation of the camp, Herta was arrested.

On Belsen Trial, she was sentenced to 10 years’ imprisonment. However, Herta was released in 1951 ahead of time. She died in March 2000 in Huntsville, the USA.

For the period 1942-1944, she held the position of the chief of Auschwitz-Birkenau female camps and directly responsible for the death of half a million female prisoners.

Auschwitz’s detainees called her a beast. Maria was one of few women who personally sent thousands of people to gas chambers.

There were cases where Mandel took some prisoners under her wings and when she got bored with them Maria included those prisoners in a list of people on a death row.

The idea of creating a camp orchestra also belonged to her. That orchestra met newly arrived prisoners with happy music at the gate of the camp. Mandel was a big fan of music and often came to musicians’ barracks in order to listen to them.

In August 1945 she was arrested by American troops. Then Maria was handed over to the Polish authorities upon request. She was sentenced to death by hanging by the court. The sentence was carried out in January 1948 in a Kraków prison.

She began her service at the Ravensbruck camp in October 1944 by becoming a senior warden. Due to her hard work, she was transferred to Theresienstadt camp as the head of all the camp’s overseers. According to prisoners, that beauty was cruel and ruthless to them.

Hildegard controlled more than twenty thousand Jewish women. She contributed to the deportation of more than 40000 women and children from Theresienstadt to Auschwitz and Bergen-Belsen where most of them were killed.

Neumann left the concentration camp in May 1945 and didn’t face criminal prosecution for the war crimes. The further fate of Hildegard Neumann is unknown.

Unlike many other German women who served in camps as wardens, Herta did other jobs. Being a doctor, Herta Oberheuser did cruel experiments on children in Auschwitz and Ravensbruck camps. She killed them with the help of the injections of barbiturates, removed their limbs and vital organs. Herta’s victims died in terrible agony fully conscious.

Moreover, she experimented with the infections of injuries inflicting cuts of children’s skin and rubbing dirt, glass and rust in it.

At the Nuremberg trial, Herta was sentenced to 20 years’ imprisonment. Nevertheless, having stayed behind bars for 5 years, one of the cruelest Nazi women was released for good behavior and returned to medical practice. Only in 1958 when the survived victim of Herta’s terrible experiments identified her, the sadist’s medical career was over.

For years, Alice has been considered to be one of the Third Reich’s severest women-wardens. She knocked out prisoners’ eyes by lashes and, then, sent blind people to gas chambers. It was she who began to throw children to gas chambers over the heads of adults in order to increase the capacity of chambers. 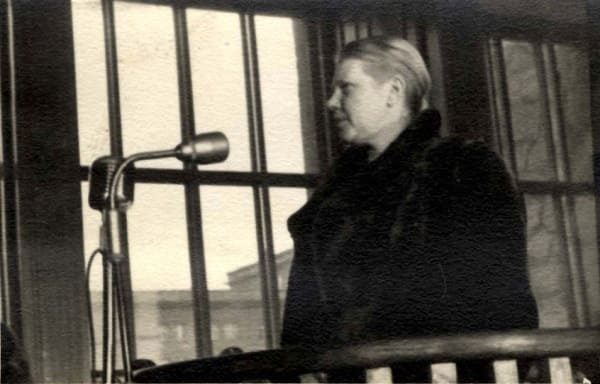 Nevertheless, by the end of the war, her attitude towards prisoners strangely changed, and she began to sympathize with them – Alis brought them water and food and helped in any possible ways.

Nobody knows how sincere her “rebirth” was. We know one thing — after the war, Alice served only 10 years on sentence and then lived a normal life. She died on the loose in 1976 at the age of 73.

Johanna was one of those Nazi women who oversaw Auschwitz camp. Johanna joined the SS as a civil servant because of need for money.

She worked in Lichtenburg as a worker in a kitchen (until May 1939). Since May 1939 Bormann served in Ravensbruck camp as a warden. Then she was transferred to Auschwitz-Birkenau.

Johanna was characterized by sadism. She constantly set her sheepdogs on prisoners. (That’s why she got the nickname “Lady with dogs”).

In January 1945 she was evacuated to Bergen-Belsen. In April 1945 she was among those Nazi women who were captured by the Allied Coalition Forces.

Johanna appeared before the court of the British military tribunal as an accused in the Bergen-Belsen workers proceedings. She was sentenced to death by hanging. The sentence was carried out in December 1945.