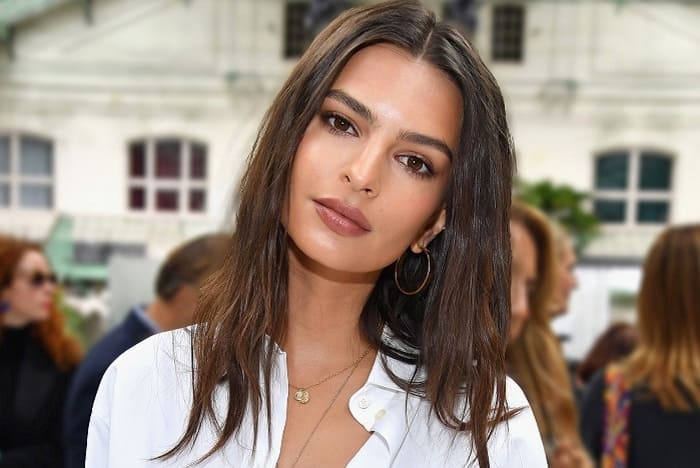 Emily Ratajkowski is one of the celebrities who became famous only thanks to her body. But is that all she can boast of? Let’s find it out from the list of top 7 facts about her.

7. Emily was a late baby

She came into being on June 7, 1991, in London and has by now obtained the status of a sex symbol. She is a bright representative of modeling and the iconic person of social media.

Some years ago, her family moved to Spain and then to Ireland, and then they settled in San Diego.

Emily has Polish, Jewish and Irish origins. Emily Ratajkowski believes herself a Polish Israeli, but she has never been to Israel.

Her mother is a writer and a feminist. Her father is an artist. Both of Emily’s parents were the teachers of a Jewish Academy.

Emily was a late child. The girl was born when her mother was 39 and her father was 45. She was raised in an intellectual and aristocratic community.

6. Emily was surrounded by nudity since she was a kid

In summer this celebrity was often on vacation in Majorca where she frequently attended nude beaches. And at her parents’ home, it was common to see young naked girls posing for her father.

All this, according to Emily Ratajkowski, accustomed her to the fact that nudity wasn’t shameful at all. However, her Bohemian parents had quite strict principles, and she therefore had to defend her views in serious disputes with them.

The situation was complicated by, shall we say, her early maturation which confused her family very much, but not herself. The female hasn’t written her own Emily Ratajkowski book yet, but she has recently written about her maturation in her essay which has become the part of a feminist project launched by Lena Dunham — the star of a television series “Girls”.

The main messages of her composition are obvious: beauty is a great thing, a body is a wonderful thing, you shouldn’t confuse relax with promiscuity, everybody is entitled to demonstrate himself.

“From early childhood, I heard from people that a girl has to be humble.” – said Emily.

5. When she was 13 men took her for an adult woman

At the age of 12 Ratajkowski has a “D” bra size. One year later, she was in a school play. Emily was dolled up, dressed in a crop top and looked gorgeous. One of the girl’s aunts who was present at the play burst into tears and said that she was afraid for Emily, because adult men perceived her as a mature woman!

It’s not surprising that the beginning of her modeling career at the age of 12 didn’t please her parents.

“It’s amazing, but it was easier for me to stay inside the model business than outside it. Everyone who wasn’t involved in that business including friends, teachers and parents made me uncomfortable, scaring and reproaching me.” – Emily Ratajkowski recalls and says that she doesn’t want to live in society which quarrels with her. “The way you react to my sexuality is your problem and not mine.” – claims the girl.

4. Emily became famous after she had starred naked and was denied the right to play a role due to her beauty

She became well known after she had starred in Robin Thicke’s music video for the song “Blurred Lines”. That song became a big hit, that’s why the music video for it was equally successful.

As opposed to Thicke, whose musical career started taking off due to “Blurred Lines” and who didn’t manage to take this chance and, as a result, somehow got lost, Ratajkowski turned out to be smarter and prompter than him. She even made a scandal after she had appeared in the music video topless work for herself, fearlessly promoting her classic slogan “Why should I be ashamed of my ideal body?” Really, why?

Since the age of 14 when Emily signed a contract with the “Ford Models” agency, she has been working in the modeling industry, and it has been fine by her. Emily likes her job so much that she perceives a chance to pursue her career as an actress without bigotry. “I want to continue to pursue modeling and I’m not sure that I’m ready to change my profession and become an actress.” – confessed Emily Ratajkowski one day. However, she didn’t abandon possibilities to be in some movies.

The beginning was made with David Fincher’s movie called “Gone Girl” where she was invited by Ben Affleck in person and played an episodic role. Later, there were rumors of Emily’s possible romance with Affleck. Nevertheless, those rumors were short-lived and soon everybody forgot it.

Then she got almost a main role in a drama “We are your friends” with Zac Efron. But all that wasn’t exactly what she wanted to receive from cinematography. Ratajkowski had an audition for “American Pastoral” directed by Ewan McGregor, but they chose Dakota Fanning over her, because Emily wasn’t “strange enough”.

Also, she didn’t get into another Broadway play of Chekhov’s piece “The Seagull”, giving reasons for their decision with the formulation “she’s too beautiful”. That upsets Ratajkowski, since she adores both Chekhov and Philip Roth (“American Pastoral” was filmed based on his novel of the same name). That’s why Emily is forced to live within the ready-made image of sex symbol.

Besides “Blurred Lines” Emily also appeared in Maroon 5’s music video for a song “Love Somebody”. It was far more humble video than Thicke’s one.

She partly attributes her outstanding merit and great body shape to ballet class in her childhood. It accustomed her to discipline and restrictions.

However, Emily’s perfect body is caused by her heredity. Whatever she does, she looks great. (A lot of American women must be jealous of her for that). Probably that’s why she isn’t crazy about diets. There is no any particular Emily Ratajkowski’s diet. That is, of course, she doesn’t eat everything, but Emily can easily have a burrito.

With regard to sports, we should quote her: “I can do without a personal coach. I don’t go to the gym. All I do is often go for a walk. I’m not interested in fitness”.

2. She was Kim Kardashian’s best friend and married after three months of dating

For some reason, good girls are drawn to Kim Kardashian. When Kanye West became her husband, Ratajkowski became her new best friend. After an uproar over a nude selfie taken by Kim, Emily decided to support her using her body. They took a joint nude selfie. “We are something more than our bodies.” – Ratajkowski commented on the picture.

Emily was in a relationship with a little-known musician, Jeff Magid for more than three years. In February 2018 she unexpectedly married an actor, Sebastian Bear McClard. They had dated just for several months before they married.

As concerns Emily Ratajkowski wedding, they had a humble marriage ceremony which was held in New York. She chose a mustard pantsuit over a traditional white gown, though a lot of people wanted to see Emily Ratajkowski dress. Many of her admirers still remember the picture of Emily Ratajkowski diamond ring posted on her Instagram. It was a gift from her husband.

1. Emily was arrested at the feminist protest action

On the 4th of October 2018 Emily participated in a protest action in Washington. It was a march against the nomination of Brett Cavano for the post of the U.S. Supreme Court Justice. The candidate is accused of rape and sexual harassment. That’s why feminist organizations (women who struggle for gender equality) went to the streets with posters and slogans. Ratajkowski who is known for her feminist views joined them and was arrested during the protest.

Should there be men and women equality in everything?

Emily Ratajkowski posted a picture of her arrest on Instagram and said that men who cause pain to women shouldn’t have a chance to hold high positions. We’d like to believe that it’s her sincere desire to get justice and not to promote her Instagram that way. We hope she will return to Emily Ratajkowski apartment soon.