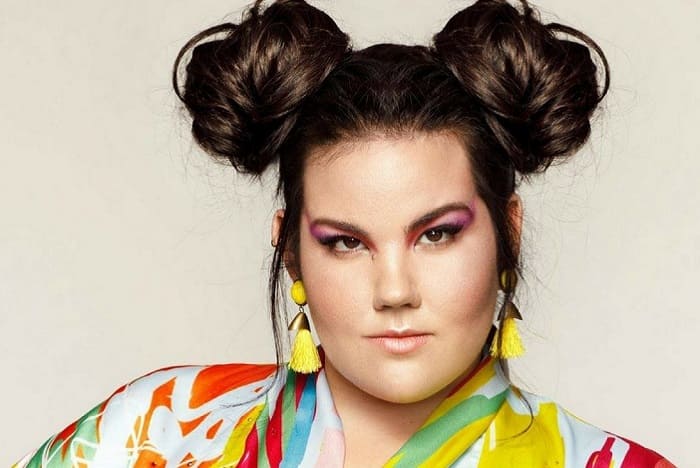 Dana is an unusual singer-transsexual from Israel. She took part at the Eurovision Song Contest in 1998 having performed a song called “Diva”, and became one of Eurovision winners.

She was born in a poor family at the edge of Tel Aviv. Her mother was a housewife and her father worked as an assistant judge. Since the age of 10 she sang in a municipal choir. When she was 16 and still was a boy Dana began to sing in clubs dressing up in female outfits and wigs. Dana’s parents treated their son’s weirdness with understanding.

In 1988, she recorded a song called “Dana International” which went on the American charts. After the release of this song Dana became popular and earned enough money to realize her dream of gender reassignment. In 1993 Dana took the most important step in her life and headed to England in order to have a gender reassignment surgery.

In 1997 the singer was selected to represent Israel at the Eurovision Song Contest of 1998. Dana ranked number one at it and became a true international star and one of the most popular transsexuals in the world.

By the way, Dana’s victory at Eurovision provoked outrage among orthodox Jews.

Many know that Ruslana Lyzhychko got the grand prize of the Eurovision Song Contest in 2004. It was Ukraine’s second participation at Eurovision and precisely Ruslana represented this country.

She pleased the crowd with a song called “Wild Dances”. Ruslana’s performance was accompanied by an insane stage show where Ruslana herself and her dancers made crazy movements wearing leather outfits as well as fur coats and played Ukrainian national instruments in the form of longer horns. During the show the singer constantly repeated a word “Hey”.

During one of Ruslana’s rehearsals for the show there was a funny incident – the singer together with her ballet had truly wild dances and caved the stage made of ultra-durable glass. They had to stop the rehearsal and wait several hours until the stage is fixed.

Ruslana was born in Lvov in 1973 in the family of the workers of the Petrochemical Institute. She was interested in music since childhood. That’s why having finished school, she got into the Lvov Music Conservatory. Her first triumph took place at the Belarusian “Slavonic Bazaar” festival in 1996. She performed her song barefoot and was awarded with the Grand Prix.

In 2004 this representative of women celebs went to Eurovision for her own money. Ruslana and her husband put everything into this contest and even got into debt to participate in it. That’s why she understood that she could come back home only as a winner.

Lena became the proud owner of Eurovision’s “Crystal microphone” when she was barely 19. She was born in Hannover, Germany. Lena is the granddaughter of a German (FRG) ambassador in the USSR.

Interestingly, she has never studied music and in particular singing. She has never even had a fancy for it. As a child Lena was fond of ballroom dancing. (That’s why she has such sexy legs). Then Lena switched to the more modern styles of dance and practiced in such directions as hip-hop and jazz-dance.

She even played some episodic roles in German shows, but Lena didn’t become famous due to them.

In 2010, she graduated from High School with distinction. That’s when she decided to participate in the selection for the Eurovision Song Contest 2010.

Without musical education she managed to defeat more talented professional competitors with ease and become a winner.

Even before the Eurovision Song Contest Meyer-Landrut was considered to be a favorite. The clip of her song “Satellite” was watched by approximately 17 million people.

Lena won this contest although she was out of tune. Half a million copies of her first album, which was released after it, were sold out right after Eurovision.

This 36-year-old singer was born in Buros, Sweden in the family of Greek immigrants. Since childhood Helena has had a breathing problem. Despite this, she was always fond of singing. At the age of 14 she became the member of a band called “Soul Funkomatic”. In two years her musical collective broke up and Helena made up her mind to leave a parental home, but her mother was against it.

In 1998 thirteen of her friends were burned at the party in Goteborg. Having remained with friends, she asked her mother for permission to relocate, but Helena was denied again.

In 1999, she recorded a song called “Opa-Opa”. After the successful release of this song, Paparizou and her friend Nikos formed a band which became the representative of Greece at the Eurovision Song Contest 2011. Their song got the third place which turned out to be the best result of Greece ever.

Then, Helena quit the band and went solo.

In 2005 Paparizou was proposed to represent Greeks at Eurovision again. At the contest she performed a song titled “My number one” and ranked first that time.

Paparizou is a rear example of a performer for whom Eurovision wasn’t a high point in her career.

To date, she has released 8 solo albums.

After the victory at Eurovision 2012 a Swedish singer Loreen became famous worldwide. Her winning song “Euphoria” came out of each receiver.

She was born in Stockholm in 1983. Her parents moved to Sweden from Morocco before she came into being. That’s why she doesn’t look like a Scandinavian (such as Norwegian) woman. Loreen says that her root lay deep in Berber peoples of Morocco.

She has dark skin and black hair. It’s all about her African blood.

For Loreen’s ancestors music was the only way to express feelings and emotions. As a child, she often visited her grandmother in Africa where she learned to sing and play drums.

When she was 12 her father died and mother was forced to bring up 7 children. Loreen was the eldest of them. That’s why Loreen had to become self-sufficient.

Her musical career began in 2004. The woman decided to try her hand at the “Idol” contest. Loreen didn’t win in it, but was one of four finalists.

In 2012, she made up her mind to participate in Swedish national selection for the Eurovision Song Contest and, having blown the jury’s mind she got the ticket to Eurovision 2012.

She was a favorite from the start of the contest and achieved the top place.

Emmelie is a Danish performer who represented her country at Eurovision 2013. Her beautiful song brought her victory.

She grew up in a small Danish town. Emmelie is half-Swedish, half-Danish. When de Forest was a little girl her dad told her a tale that a British king Edward VII together with one of the Austrian princesses once conceived a child. And that illegitimate kid was Emmelie’s grandfather. Therefore, Emmelie was the relative of Victoria, the Queen of Britain.

During the selection for Eurovision she often told about her “blue blood”. However, historians researched the singer’s bloodline and came to the conclusion that it’s just a family myth which had no basis in reality.

As a child Emmelie sang in a church choir and at the age of 14 she began to cooperate with a Scottish singer Fraizer Nil. They toured the entire Denmark together. The main feature of their performances was the fact that they went on stage barefoot in order to be closer to the Earth.

Five years ago she managed to get a “ticket” to Eurovision 2013 where she took the first place. In March 2013 Emmelie signed a contract with a recording company “Universal Music”.

Her fans joke that this singer is “the classified arm of the Israeli army”. Netta was an Israeli representative at the Eurovision Song Contest 2018 where she performed a song “Toy” and ranked first.

She is a gifted young singer with a peculiar look and the good sense of humor. She has everything that viewers like.

Barzilai is a feminist, that’s why European women like her.

Netta was born in January 1993 in a central area of her country – Hod Hasharon which is not far from Tel Aviv.

She finished school with distinction and got into a prestigious musical college.

In 2012 when she was almost 20 the girl took a job as an instructor in a training camp for entry-level musicians. Then, she was appointed to head the camp’s council and was included in the ensemble of IDF’s Navy.

After military service the singer continued to make music.

Barzilai states that if she didn’t become a singer she would devote her life to work at nursery school or the studying of psychology.

When she was a child, Netta suffered from prickly ridicule of her classmates. Already then she saw that she was different from her peers. Having matured, she embraced who she was and loved herself. She turned her singularity into her strong suit and became a winner.

Netta is unmarried and doesn’t comment on her personal life.